For a better experience please update your browser.

Your browser must have cookies enabled otherwise you will not be able to login or register. Please enable cookies in your browser and then refresh the page to continue.

I, John Kearns, and I, Pat Cahill, join hands to present the new season of our messy, loving, self flagellant off broadway show 110%. Guest this month: Edinburgh Comedy Award nominee and ‘Upstart Crow’ star Spencer Jones.

This event is sold out

Your data is being transmitted securely via a strong 256-bit encrypted SSL connection.

Total booking fees comprise charges for IT services, credit card charges and/or other administrative fees allocated by the event organiser

I, John Kearns, and I, Pat Cahill, join hands to present the new season of our messy, loving, self flagellant off broadway show 110%.

We chat, we dance, we do new bits and old, we pause and go again after the interval! We have our regulars in the audience, on the stage, and in the pub, all poised to return with new thoughts on the northern line, new sings to song and new pints to be dropped.

Come down and become part of a conversation between two idiots and the rest of their liiiiiives. Also featuring our favourite guest friend comedians doing whatever the hell it is they want! 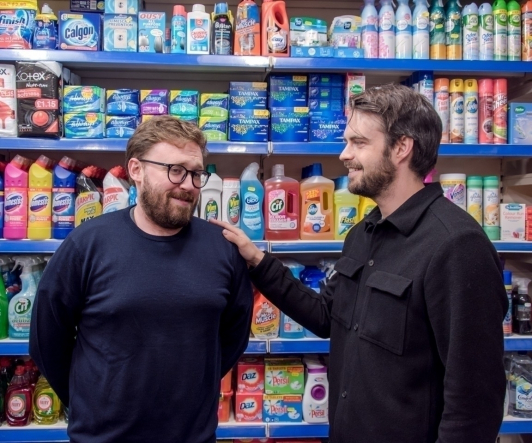