We're back! Whether you're dry January-ing or chugging along as usual and looking for some nice fun and pints, why not come along to the second ever Angel Delights! Featuring Lucy Pearman, Helen Duff, Zach Zucker, Kat Sadler, Christian Brighty & your MC Ben Target!

We're back! Whether you're dry January-ing or chugging along as usual and looking for some nice fun and pints, why not come along to the second ever Angel Delights!

Once again we've rounded up a delicious selection of comedy delights for your pleasure this afternoon.

Edinburgh Comedy Award Best Newcomer nominee, Lucy Pearman, is 'a proper performer brimming with charisma, and her magic shines through.' (The Skinny)

‘Lucy Pearman is oxymoronic in that she is a niche for everyone. Her bizarre character comedy is one of the most unique acts at the Fringe but almost anyone who goes in to see her will surely be delighted by work’ ★★★★★ Broadway Baby

Comedy award-winning, critically acclaimed and socially conscious clown, Helen Duff started performing comedy in 2014. In addition to her blossoming stand-up career, Helen is also a talented actor and voice-over artist, holding a BA Hons in Acting from the London Academy of Music and Dramatic Art. She recently wrapped filming on her first feature film, Holmes and Watson, with Will Ferrell and John C. Reilly, scheduled for release in 2018.

Fresh off sold out shows in New York, London and LA, award-winning comedian Zach Zucker returns to London with brand new absurdist standup comedy! Most of the time Zach is funny. He received 9 standing ovations, 14 walkouts and 3 police complaints at the 2018 Edinburgh Fringe.

★★★★ "It is impossible to not become a super fan of this hugely talented human clown with a very promising future." Broadway Baby

★★★★ "A hilarious riot of free-flowing sketches, performed by a master clown with a big future" Fringe Guru

Kat Sadler is a comedian, writer and actor, as heard on BBC Radio 4 extra. She is the editor and creative director of Succubus, a satirical women’s magazine. She also writes for The Daily Mash.

“A joy to spend time with” - The Skinny
“★★★★ Viscerally funny” - The List
“Will make you laugh til you cry. Or cry til you laugh” - Funny Women

Christian Brighy is a clown with a law degree. He has been a part of sell our Fringe shows such as Wigwam Wonderjam and Luke Rollason's Planet Earth at Edinburgh Fringe 2018.

"Talent and quick wit" (The Scotsman)
“Hilarious” (The List) 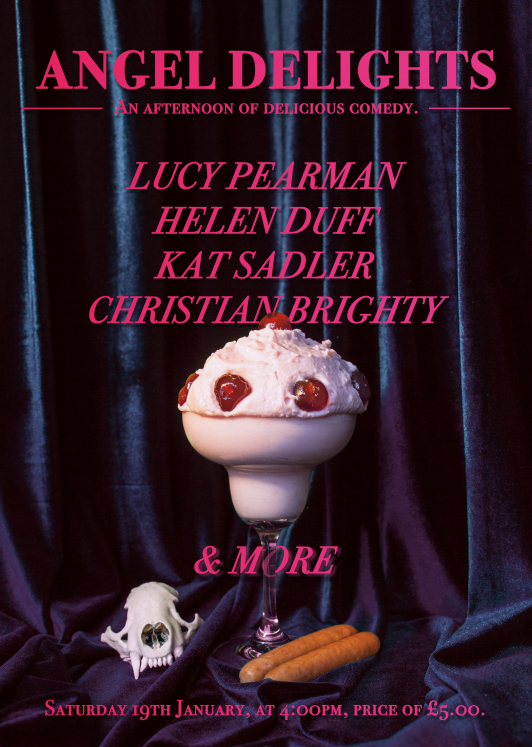