Why did the gay man cross the road? For attention...obviously.

Join gay orphan Mark and gay bastard Will as they find an impossible number of ways to tell you that gays have sex by putting a penis in a bum.

Why did the gay man cross the road? For attention...obviously.

Mark and Will are both gay. In the modern sense, of course, they’re certainly not ‘happy’...as you’ll discover. Join gay orphan Mark Bittlestone and gay bastard Will Dalrymple as they find an impossible number of ways to tell you that gay guys have sex by putting a penis in a bum. It’s an hour of gay comedy - sketch, stand-up, one liners, erotica, powerpoints - anything goes...except for jokes about something other than being gay.

Playwright and comedian Will Dalrymple’s comedy chiefly consists of his explicit parody gay literotica series Man to Man, which ThreeWeeks described as “some of the most depraved and disgusting filth I’ve ever heard” and “hysterical”. Dalrymple agrees on both counts. Comedian Mark Bittlestone’s debut stand up hour, Pity Laughs, first played in Cambridge in January 2017, where it was described as “brilliantly crafted, shocking and intimate comedy”. Mark is a regular on the London stand up circuit and was runner-up out of 200 entrants in Comedy Virgins’ prestigious ‘Max Turner Prize’ in January 2018.

“Never have I seen such a stylish middle finger pointed at homophobia and general misfortune.” Broadway Baby ★★★★★

“Horrifyingly funny… not for the faint-hearted.”  EdFringe Review ★★★★

“It’s been a blast, a show whose brazenness you can revel in” The Wee Review ★★★★ 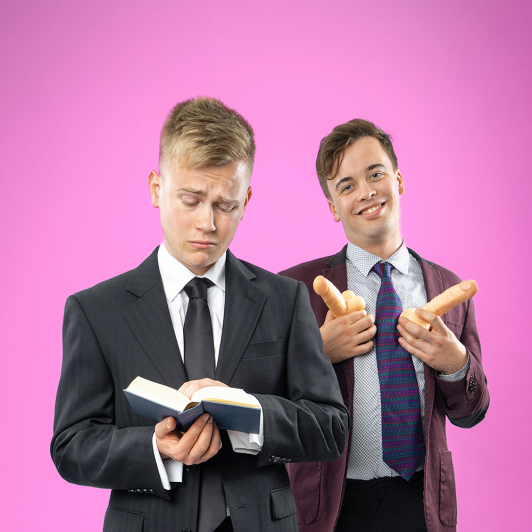